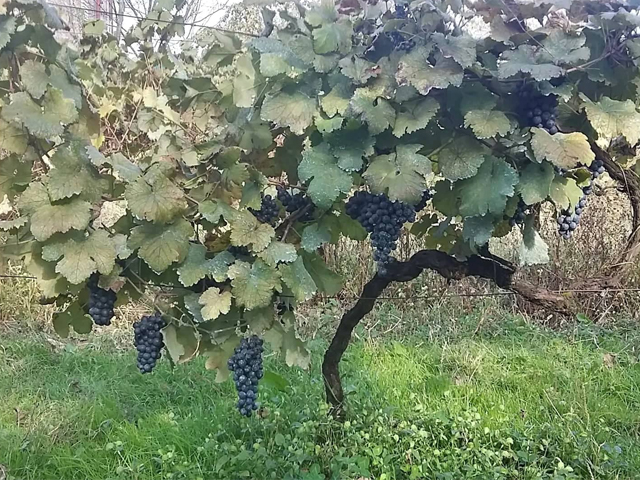 Aladasturi is one of the most popular Georgian grape varieties. You will often hear legends about the origin of the name of the variety. The authors of "Ampelography of Georgia" (Niko Ketskhoveli, Maxime Ramishvili, Dimitri Tabidze) described Aladasturi as a red grape variety of Guria. Geographically, this variety is also widespread in Imereti.

The name of the variety – Aladasturi - is an Arabic word combination (Allah, Dastur), which means “Allah’s consent”. There is a legend according to which Arab invaders really liked Aladasturi despite their religious restrictions and as a result of their love for that wine, in order to justify themselves, they said the wine was so good even Allah himself gave them His consent.

Although Aladasturi has been described in detail by ampelographers and many of its specific signs are known, today in private vineyards and yards of Eastern Georgia, a completely different grape variety, called Aladasturi, is mass-grown. In fact, it is a hybrid grape variety imported from Moldova, which has nothing to do with the real Georgian Aladasturi.

Grape-growers have been raising this issue for several years now, whoever, it’s still unresolved. The founder of Natural Wine Association Ramaz Nikoladze, who knows Aladasturi grape and wine very well, assumes that vineyards in Tbilisi and Eastern Georgia mainly contain hybrid Moldovan grape varieties that don’t require special care or treatment. That is why these low quality and absolutely useless in terms of winemaking grape varieties have become so popular.

According to “Georgia’s Ampelography”, arguably no other grape variety has been so firmly established in Georgian literature and folklore than Aladasturi. One may encounter Aladasturi in historic sources, poems, verses, songs, folk stories and even proverbs. This is notwithstanding the fact that Aladasturi’s distribution area was smaller compared to other Georgian varieties (for example, Rkatsiteli, Tsolikouri, Saperavi etc.) as it was mainly found in west Georgia, especially in Guria and Imereti regions.

Despite this, it seems that unlike historic memory, Aladasturi has been completely erased from Georgians’ gustatory memory and that’s why that unique grape variety has now been replaced with an absolutely unknown hybrid fake variety.

Levan Ujmajuridze, Professor, Director of Scientific-Research Center of Agriculture: “Back in the day, a research center situated in the capital of Moldova Chisinau developed a table grape variety called “Moldova”, which is a different variety of grapes. Then they brought that variety to Georgia and planted it in the scientific-research center’s local base situated in the village of Kanda, Mtskheta municipality. That’s where that variety spread from mainly in Kartli and Tbilisi and since it outwardly resembles Gurian grape variety Aladasturi, people started to call it the same name, whereas that is a table variety and it has nothing to do with the Aladasturi, which is now mainly found in Guria and Lower Imereti. With its color and the berry shape “Moldova” really resembles Aladasturi, but its grape cluster is much bigger than that of Aladasturi and you can distinguish them from each other with that feature.”

Giorgi Barisashvili, grape-growing/winemaking researcher: “Unfortunately, false information regarding the Aladasturi variety has been actively circulating. People are easily mistaking Aladasturi with the so called “Moldavanka”, that latter hybrid variety was developed in Moldova 45 years ago and it has nothing to do with our Aladasturi variety. It does not have value in term of wine.

Aladasturi is Guria’s red berry grape variety intended for winemaking. Since it can be preserved for long periods, locals also use it for table consumption. This is a late-season variety and it’s harvested by the end of November. “Moldavanka’s” berry is quite oblong, which is another strong distinguishing feature from our Aladasturi variety. Besides, Aladasturi’s leaves have a strong downy appearance, which is not the case with “Moldavanka”. The leaf’s shape and features, vegetation periods and the sum total of active temperatures are also different, in other words, everything about them is different…’’

Besides, there is quite an original way of making the Aladasturi wine. Sometimes Aladasturi grapes were harvested during the first snows. They would be placed on wickerwork platforms and kept there for a while, during that period surplus water would evaporate from the grape and its sugar concentration would increase; as a result, a sweetish and often fizzy wine would be made, which people would consume during Christmas time (after the Advent).”

Several members of Natural Wine Association from Western Georgia have been producing and selling Aladasturi wine both on the local market and abroad for many years. Rose wine from Aladasturi is also good. According to Giorgi Barisashvili, there is also a different way of making Aladasturi wine - the grapes were sometimes harvested during the first snowfall. They would put it on the braided baskets for some time. At this time, excess water evaporated from the grapes and the concentration of sugar in it increased. As a result, a sweet, often sparkling wine was obtained, which the population enjoyed at the end of the Christmas fast and during Christmas days.

Meeting of members of Natural Wine Association with German expert

Zero Compromise - The wineries participating in the festival are revealed!